It’s quite a common question for those of us that, unfortunately, aren’t surrounded by bikers all day every day. I’ve been hearing it for years, and I expect I will continue to hear it for pretty much the rest of my life. Regardless of the cliché, however, it is a good question.

Why do I ride? 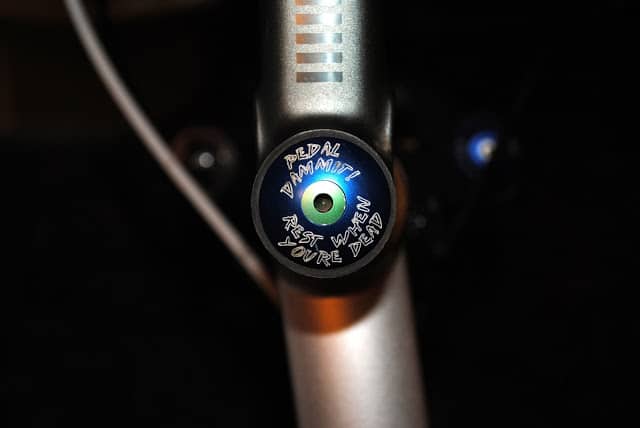 I ride for fun. Regardless of how frequently you ride, there’s no arguing that mountain biking is just plain old fun. Some people go skydiving, some people ride rollercoasters, and some people ride mountain bikes. Off-hand, I can think of maybe four things that are more exciting than riding (only two if we aren’t counting riding uphill), but I can’t think of anything that has more “fun” appeal. Ask yourself: would you rather be sitting at home playing a computer game, or bombing down a double black diamond? If you’re here reading, you probably agree with me that the latter choice is most definitely the better one. Even if I’m not out on trails, there are an awful lot of fun things to do with a mountain bike. Urban riding, as a matter of fact, is oftentimes scarier than trail riding. I’ve almost been hit by a deer twice in my life, but I think the number for cars is fast approaching triple digits. Also, let’s face it, there’s something pretty fun about showing off your ride to whoever happens to be outside at the time.

I ride for freedom. It seems like the older I get, the less freedom I have. I mean, sure, I can drive, I can vote, and I can buy booze. The flipside of that, somewhat depressingly, is that I’ve already spent 15 years in school (with each year getting progressively longer, it seems) and I have at least another six to look forward to. On top of that, I get to supplement my time in school by spending time in an office – something that I have no doubt will stretch into longer hours and more days. Readers, I’m sure you all know the feeling of being stuck, inside, watching the day wear by and the sun go down. Biking, for me, is pretty much the antithesis of that feeling.

Getting out on the trails is like being a little kid in a sandbox, only I can get dirtier. No one can tell me what to do! I can go wherever I want, however fast I want, using whichever route I want! I am fortunate enough to live in an area with an exceptional network of trails combined with an exceptional network of people to build and maintain them, so I quite frequently have new trails to explore and different directions to ride. The map that I have is rarely used – and even then, it’s four years old – so more often than not I wind up about as close to “lost in the wilderness” as one can get these days. There’s also a very primal feeling that comes from riding. When I’m out there, I get a very distinct feeling of “man versus nature”. Now don’t get me wrong, I love the “out in Nature” aspect of biking (as well as Nature herself) and I’m somewhat of an environmentalist, but there is something indefinably empowering about making it up that particular rock face, or down those damn root steps that always seem to be just a bit too slick.

I ride for me. Perhaps I am alone in thinking this, but I find that mountain biking is much more of a challenge against myself than it is against Nature. Yes, the rock faces are hard, and yes the roots are slippery. They don’t have any control over that though, do they? No, I think the most difficult part of riding is convincing myself that I actually can ride that face, or hit those steps. Usually I can talk myself into it, and most of the time it goes pretty well. Most of the time.

Undeniably, the hardest part is getting over the fear of falling, or of looking like an idiot. Every once in a while I will fall, but even then I know it’s because I challenged myself, took the risk, and overcame that fear. That’s what it’s all about, for me. I ride so that I can push myself over the cusp of self-doubt, where intellectually I know I have the skills to do it, but am for some reason still afraid of trying. I have yet to find a feeling quite so amazing as what comes after the mental turmoil – worrying myself that I can’t do it, followed by a look, followed by a somewhat white-knuckled descent is indescribably euphoric. It’s easy to beat the trail, but it’s much, much more difficult, and so incredibly rewarding, to overcome your own fears and beat yourself. That’s why I ride.