Biking with your dog is great! It’s exercise for you, exercise for you dog, and bonding for the both of you. Sometimes, though, you need to haul a bit of extra stuff, more stuff than you can stuff into your pack. That’s where dog packs come in: quit letting that little bugger get away with carrying nothing, strap a pack on and let him haul his own food and water! Below, I’ve reviewed Canine Equipment’s answer to the dog pack, their “Ultimate Trail Pack”. Equally usable as a pack or just as a harness, this thing has a lot to offer for bikers and hikers alike. Check it out! 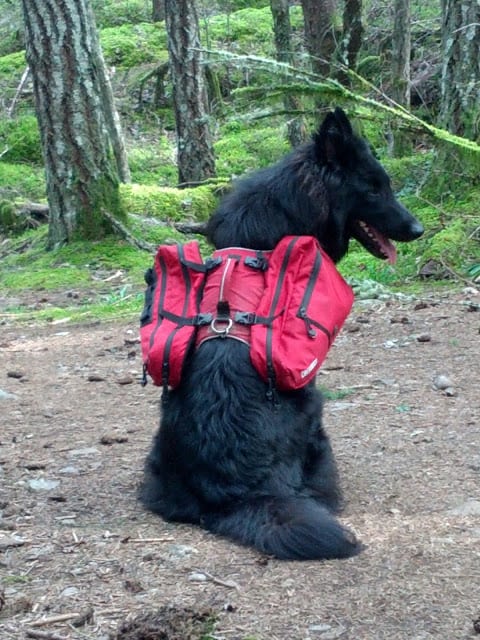 The Bad: Tends to slide around; Awkward arrangement of buckles when using packs; D-Ring coating not particularly durable; Hot

Price: $70-$90, Good Value. Comparable to Ruffwear packs (I believe the size is about equal to the Approach pack), and a bit spendier than Ollydog’s offering. As far as I know, other than the $130 Palisades pack from Ruffwear, the Canine Equipment pack is the only one that has removable bags.

The Down and Dirty: Overall, the Ultimate Trail Pack is a worthy addition to any biking/hiking dog’s list of accessories. The pack has plenty of space, does its job well, and has a wealth of extra features that make it quite handy for all kinds of excursions.

The one thing that keeps this pack from being excellent is its annoying habit of slipping sideways on the dog. Even without the panniers on, the cushions on the chest straps always seem to migrate in one direction, allowing the harness and pack to slide the other way. Check out the pictures for a better idea of what I mean. It isn’t a super big deal, mostly it just means we have to stop every 20 minutes or so and pull it one way or the other. Some of this could be due to the fact that my dog has fairly long hair – oddly enough, people won’t lend me their dogs to test it out with short-haired breeds. Surprising, I know!


I have noticed that with heavier loads, loosening the pack straps usually results in the whole thing sitting a bit closer to level. The problem is, the looser those straps are, the more the packs flap around at higher speeds. This issue would most likely be mitigated by adjustable loops on the underside of the pack (see below), but that takes a bit more sewing skill than I have at the moment.

Ziggy carries two water bottles (just your standard bike-shop bottles), a folding bowl, about 3 cups of food, a leash, a few bags, and occasionally my old Android phone (so I can run My Tracks for the both of us), and there still seems to be room for more stuff. At this point, we’re actually limited by weight rather than space. There is also, for a reason I have yet to work out, a small port that looks like it was built to allow headphones to run from the pack (you can see it in the first picture). I don’t really know what my dog is into, but I’m not sure I could justify buying him an mp3 player.

There are a ton of adjustments you can make to the pack to get the perfect fit – neck, both chest straps, and the front and rear of both panniers.That’s three points of adjustment for the harness, and four total for the packs, resulting in an almost ridiculously customizable fit for your trail buddy. Unfortunately, there is one spot I wish could be adjusted, but isn’t. The back-side of the panniers have a small strap that is supposed to go under the harness’ main strap, keeping the pannier from flapping and flopping when the dog runs. I always find that these are a bit too loose, which has a habit of making it look like Ziggy’s pack is trying to fly away with him..

One of the great features of this pack is the fact that the harness is entirely separate from the packs. Say you’re just going for a walk, but you want the added security/visibility/handle that the harness provides, without the noise and added bulk of the packs. Each pannier has two buckles that hold it onto the harness, so it’s super simple to go back and forth between the setups.


For days that are going to be particularly hot, or short, or fast, I usually just leave the packs in the car and put him in the harness. I prefer doing that instead of having him just on the collar because it makes him more visible (both in the parking lot and in the forest), and it adds an extra handle I can grab onto – pretty helpful when you need to grab the dog and don’t have time to get off your bike.

Heat is going to be a problem, though – the harness and packs are very solid. Even now, when the hottest ride we’ve been on has been ~15 (that’s about 60 for you Imperial folk), the combination of long fur and zero breathability means his tongue comes out in the first five minutes.The upside to this is that I’m not concerned about it breaking, and for those of you that are handy around the house there are all kinds of modifications you can make without worrying about destroying the harness (for example, I’ve sewn a strip of velcro and cut a few holes, so I can mount my camera to him). It seems to hold water well enough, though, so once the sun finally decides to come out I may try just hosing it down before we start riding.

Overall, it’s definitely a great piece of equipment. I’ve been using it more as a harness than a pack, but that’s primarily because by the time this goes public Ziggy will be 3 days shy of 10 months old: too young to carry an awful lot of stuff (if you’re curious, the internet and our vet say not to go over 30% of the dog’s weight in the pack. I’ve been sticking at or below 10%, and probably will until we hit ~14 months or so). The fact that it’s washable is fantastic, too – Ziggy seems to have the same concept of “dirty=fun” that I had for the first half of my life (well, okay, sometimes I hit the mud puddles on purpose). The habit of slipping sideways is easily managed with a quick yank every now and again. I am quite impressed with the durability, too – he’s worn this pack through forests, oceans, beaches, lakes, rivers, and dog parks. It’s survived teeth, rocks, salt, sand, mud, and even Ziggy himself (which is no small feat!). Other than a few cosmetic scratches on the buckles, and a bit of corrosion on the D-Ring, the pack still looks and works as it did when I bought it. I would definitely recommend this to anyone looking for a good dog pack or just a simple harness – it does great at both.