A Tale of California Trails

A Tale of California Trails

[ED: Please give a warm TMTBL welcome to our newest guest poster Jenn! She comes to us from beautiful Whitehorse and will be sharing with us once a month, check out her Flickr and Blog to follow more of her awesome adventures.]

Spring has been slow to, well, spring in the Yukon this year. So, In order to escape winter’s last gasp and to celebrate my 40th birthday, I took off for a week of riding (and, let’s be honest, wine) in California with four close friends. On April 27th I boarded a plane and flew down to San Francisco.

Ah California. The birthplace of mountain biking (unless, of course, you are from Colorado in which case you might disagree). The place where near perfect weather, beautiful ocean views, delicious wine and a plethora of super fun bike trails come together. While we did enjoy five awesome days of dirt on this trip, the challenges of trail use, land management and the inability to share did not go unnoticed and they made me even more grateful for the trail network I enjoy in my own backyard: Whitehorse.

In our group of five, three of us rented bikes (Santa Cruz Highball 29er hardtail) while the other two brought bikes from home (Yeti ASR-5 and a brand new Intense Tracer 650b). I had never ridden a 29er and I was somewhat apprehensive, given my truncated stature (5’4”) and some of the things I had read about in terms of short people not being suited to the larger wheel size. I had no reason to worry, as it turned out, because the buff trails that we explored were perfect for the Highball. I loved the bigger wheels. There is no question in my mind that 29” made it easier to roll over obstacles and to clear the few steps and rocks we encountered. I also really noticed that the clearance was a lot better than it is on my bike (a Giant Anthem). On the down side I did find that the 29er was a little less stable when cornering or maneuvering. Sometimes it felt wobbly. That said, obviously there were a lot of factors at play here and I am sure a bike with different rims, a better fork and all the components chosen to my liking could have addressed some of my concerns. Bottom line: I am again aware that my bike ownership equation (n+1) needs adjustment. I’d love some bigger wheels.

Santa Cruz: We spent three days in Santa Cruz because we were pretty sure we could get three decent days of riding in and because we rented our bikes here so we had to pick up and drop them off in town. Day one was out at Wilder Ranch which, although it granted us beautiful views of the ocean, wasn’t particularly exciting as far as trails go. On day two we made it up to the Soquel Demonstration Forest. The terrain was completely different from that at Wilder Ranch: in the trees, some steep descents, twisty-turny, just a lot more fun than Wilder. And on our fifth, final day of riding we headed over to UCSC where we had some trouble figuring out the best route up but where we also enjoyed a really fun, long swoopy downhill trail. 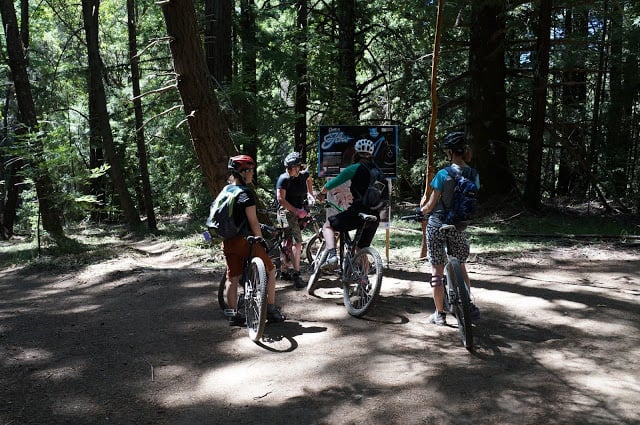 In the Soquel Demo Forest looking at a sign promoting a fund to build a new trail in the area
Santa Barbara: Our intended ride here was the IMBA epic, the Buckhorn. However, due to some obstacles (a lengthy search for Hope brake pads at a variety of SB bike shops, a surprise at just how far out of town the trailhead was, a daytime temperature that hovered around 30C and an incredibly sore back belonging to yours truly) the route was changed to a shorter loop that incorporated a trail called the Santa Cruz Speedway. I actually spent this day off my bike entirely (which I admit did result in some tears; I suffer from FOMO, Fear Of Missing Out) so these comments are based on my friends’ experiences.

Planning our route in Los Padres National Forest
The Los Padres National Forest trails were hot, dry and dusty and nearly void of people. There were only a handful of other users (on ATVs) on the trail so it was a pretty remote experience for a populated state like California. The climb out from the parking lot was roughly 11 miles, ending at a campsite on Pine Mountain. And then: the single track descent began. The views were spectacular and made it hard to concentrate on the switchback trail that dropped away to some impressive exposure in places. Seven miles of down on generally buff singletrack was worth the pedal up for the views and the speed of the descent.

Santa Barbara singletrack!San Luis Obispo: We arrived late to Montaña de Oro State Park as we had spent the previous day frolicking on the beach and taking a break from riding. It’s unfortunate because I think that this central area of California has a lot to offer mountain bikers and the trails we rode in Montaña de Oro (East Boundary, Manzanita and a couple of others) were a ton of fun. I believe these were all purpose built for biking and the climbs were almost as much fun as the descents. They were sustained ups but at a relatively easy grade. This was one of the times when the 29er felt superior to my bike at home; climbing seemed easier when every pedal stroke felt like it went further. The views here really were exceptional and the singletrack was a lot of fun. We really enjoyed a long downhill section from Hazard Peak on which we got quite a lot of speed. 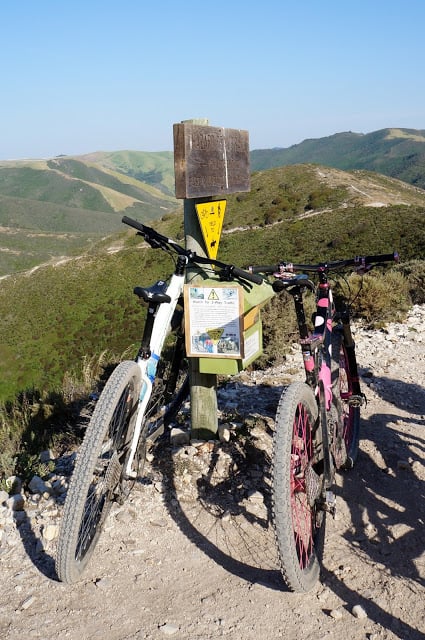 Montana De Oro State ParkSo overall we definitely had a great week of riding and of weather but what was disappointing, or perhaps just sad, was how difficult it was to find the right trails to ride. While this was less of an issue in both the Los Padres National Forest and on the purpose built trails in Montaña De Oro State Park, certainly it was a challenge in Santa Cruz. That’s not to say that there weren’t friendly and helpful people out there: there were. It’s just that they often either misread who we were and the type of trails we were capable of and interested in riding (perhaps due to the fact that we were an all female group?) or they didn’t want to tell us what trails were really worth riding because they were ‘for locals only’ or illegal. Don’t get me wrong, I think that if I lived in a place where there were huge tensions over what uses were allowed on which trails and if mountain bikers had to fight for access on a regular basis, I would probably be hesitant to share the great (and maybe illegal) trails with outsiders too. After all, if an outsider gets caught or does something on a trail that damages the reputation of cyclists, the outsider just goes home. But the locals have to live with the fallout: closed or decommissioned trails and an increase in the belief that mountain bikes harm trails more than other users groups (which we don’t). 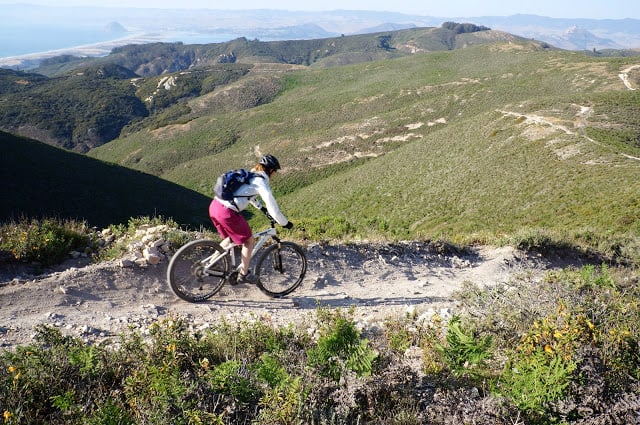 Heading down Hazard PeakMy point in all of this is not to bash Santa Cruz or California, because we had an awesome time there. Rather, it is to be thankful for the trail network in my own backyard. The City of Whitehorse has, for the last six years, actively developed and maintained a network of hundreds of kilometers of trails. They have a trail plan in place which lists diversity as one of its guiding principles and they have committed to accommodating a variety of motorized and non-motorized activities. Our local mountain bike club has worked collaboratively with the city to maintain the trails and we have a voice at the table when it comes to trail planning. It isn’t all sunshine and roses, of course, but I know that I am privileged to live in a community where mountain bikers are seen as a force for good when it comes to land use. There are increasing tensions between user groups here, yes, but I believe that in most cases and places all users can share the trails and be nice to each other.In the end, turning 40 wasn’t quite as painful as I thought it might be. The wine was sweet, the company sweeter and I had some great trail experiences in a beautiful place. I hope that the relationship between parks, land use managers and bicycles will continue to improve in California. It would be a shame for the state to become a place where mountain biking was not only born but also killed off.

Me, looking pretty happy for being 3 days away from the big 4-0.  Bikes can do that.