Roll Your Own Adventure

Roll Your Own Adventure

Sometimes I reply “If I tell you I’ll have to kill you”.

But today I thought I’d let you in on a few secrets, and let you live to tell the tale. 😉

Where did you get the idea for that ride from?
You don’t always need to plan a ride.  Sometimes, especially on your own, one of the joys of the Mountain Bike Life is riding off from home, not quite sure where you’ll end up, but knowing that an adventure is ahead.These sorts of rides are great for the soul – especially when you’re by yourself, and you’ve got all day to do what you want.

“Dundas Road”, D’Aguilar National Park, Queensland.
But they don’t cut the mustard when you’ve got a group of friends and a limited amount of time.

Stand on the Shoulders of Giants

Most places you’d like to ride have probably been ridden before, so an easy place to start is to browse routes that have been created by other people.

There are plenty of web sites that let you browse other people’s routes:

Or just go to Google and type “Mountain Bike Routes in ” your home town.  Here are a couple for my home area:

Please feel free to add your own trail link by leaving a comment.

Some of these sites will let you download GPX or KML files of the route.  I’ll show you how to load these files into your computer or your GPS later in this article.

Fill in the Gaps.

A few months ago, on a whim, I loaded track logs from a lot of the rides I’ve done over the last year into Google Earth.  This gave me a “Ride Network” showing one combined track of some of my favourite riding spots.  I loved this map because it showed an unbroken red line from my front door to many of the most scenic places around here.

At first glance, some of those gaps didn’t seem to have many off-road trails, but I used a bit of imagination, and a few other tricks (see below) to work out some fun routes.

HINT:  If you’re not sure how to use Google Earth, please keep reading.  I’ll give you a few suggestions below.

One of my few regrets is not studying more history at school. Local history tells us what happened in our back yard before we were here.  For someone who loves exploring my own back yard, this can be fascinating.

Many libraries have a “local history” section.  One invaluable resource for finding fun trails is an old Cadastral Map.  (Ask your library if they have any).

Cadastral Maps show property boundaries and roads.  If you get an old one (say from around 1910 to 1930) you’ll be able to recognize some of the older roads and properties in your area.

Many of the old roads follow natural land features which made obvious places to travel.  Some of them even follow in the footprints of indigenous inhabitants who lived in the area centuries ago.

As time progresses, properties are often subdivided into new estates, and old roads are usually upgraded to new arterial roads.  But sometimes old roads are forgotten.  This can happen if new freeways are developed, or if the landscape changes because of major constructions like a dam, or an airport.

A large dam was built near here in the 1970’s. Some major roads were flooded by the dam and became useless for traffic.

In the case of Rush Creek Road (above), the paved road was ignored for decades, and nature slowly reclaimed it.  Today it’s a lot of fun to ride on a mountain bike 🙂

What’s really cool is that Google Maps shows many of these old roads, AND cadastral boundaries.

This is what Whiteside Road looks like today. How cool is that?

Some organizations actively promote historical trails, such as the Appalachian Hiking Trail in the USA, or the Bicentennial National Trail in Australia.

The exciting thing about old trails is that you’ll often discover historical sites along the way – such as survey trees, building ruins, road remnants, even old railway lines.

I am a Google Map junkie.  I spend more time on there than any other site.  Sometimes you can find a fun route by just plugging the start and end points into Google Map, and tell it to find a walking route.

For some reason, Google Maps will use old road reserves and minor trails if you tell it to find a walking route.  Here’s a quick 1 minute video that shows you how to quickly create a route using Google Maps, then save the route for later.

The cadastral information on Google Maps comes in really handy in finding old road reserves, which can often be fun to ride.  Sometimes they won’t be named, and may not even appear to be a road, but often the land will be reserved for a road, which allows public access.  If you’re lucky, there will often be a ride-able track.

This map shows property boundaries on the Google map that’s available at http://goo.gl/maps/4ouN5

The green arrows point to a road reserve – public land set aside by local government for a road.  Road reserves are easy to spot on cadastral maps.  They look like long skinny gaps in the property boundaries.  Even busy main roads are built on a road reserve.  If you zoom in far enough on any road in Google maps, either side of the actual road, you’ll see the property boundaries marking the public land  on which it is built.

This example is a favourite ride I do every week.  The road is actually the remnant of an old trail built in the 1840’s called “The Old North Road”.  Much of the old road is lost, but happily there are one or two spots where you feel like you’re following in the footsteps of pioneers.

Have a look at topographical maps

Topographical Maps are a great way to get information about trails in an area.

When you buy a recreational GPS, you often have the option of purchasing topographical maps with the device.

My favourite topo maps for mountain biking are available for free at http://OpenMTBMap.com, and cover most of the world.

To find out more about topographical maps for your area, try typing in “digital topo maps” and your town into a search engine, or try websites such as:
USGS
SunMap
Digital Topo Maps

HINT: It’s not that difficult to load topographical maps into Google Earth to help you plan a riding route.  I’ve included a video later in this post which shows you how to do this.

How do you work out the route?

Before you plan a ride, it’s important to think about a few things:

How long do you want to ride for?  It’s no use planning an all day ride if you or your friends are only physically able to ride for two or three hours.  If you want a fun day, and friends that will want to ride with you next time, make sure the route length suits the ability of the riders.

How are you going to eat?  For rides longer than about three hours, you’ll probably want to stop for a bite to eat.  Will there be a place along the way that you can buy food?  Will you have to take your food with you?  I love riding into a small town in the middle of a ride and buying my lunch.  It means I don’t have to carry so much in my pack, and it offers a handy “bail-out” point if one of your buddies isn’t able to finish the ride.

Does it have to be a loop?  Many people don’t ask this question, but it opens up exciting possibilities.  Most of our rides start and end at the same place because it’s easy to organize.  But with a little prior planning, you can end the ride in a different place, which means you can go further in the same time.  Point to point rides are more complicated to organize, but here’s some easy ways to organize them: 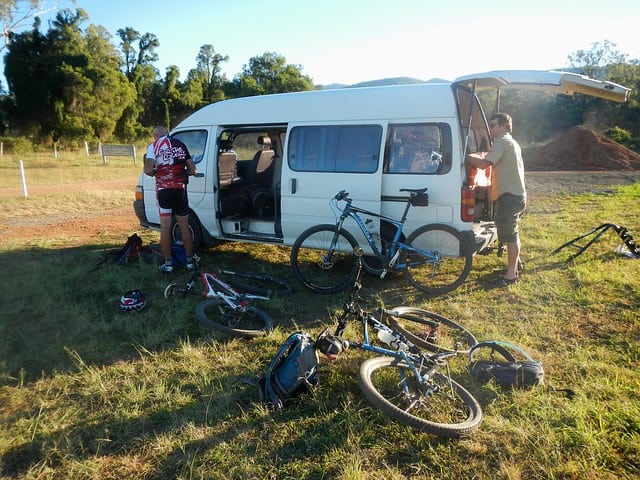 Get a driver for the day.  Perhaps one of your riding friends is injured, unable to ride, and itching to get out on the trail.  Why not ask them if they’re interested in dropping you off, and picking you up after the ride? 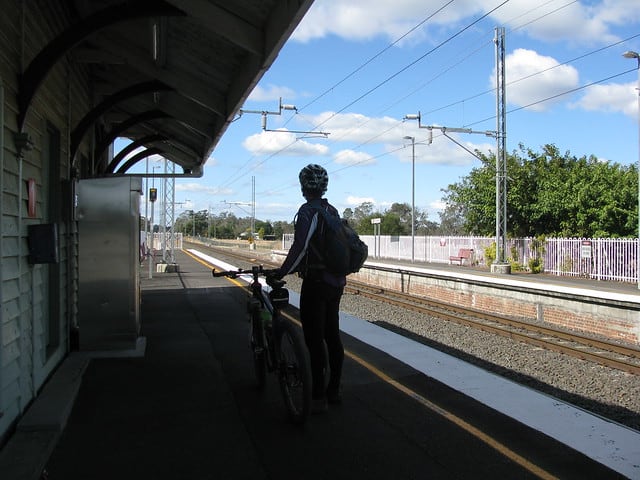 Catch the train.  Some of our most enjoyable rides have started near one railway station, and ended near another.  At the end of the day, we caught the train home.  This doesn’t work well in peak hour, but late in the day on the weekend is a perfect time to catch the train – and it usually doesn’t cost much either.

Take two vehicles.  This is a bit more complicated.  Both vehicles meet at the end point.  Leave one vehicle there, and drive to the start point in the other vehicle.  Do the ride, and drive back from the end point in the first vehicle;  The disadvantage with this approach is that it adds more driving time to the day.

Once I have an idea for a ride, and have worked out the logistics of how to make it happen, I usually load my ideas into Google Earth.

Here’s a short video that shows how to collate all your information from topo maps, other peoples rides, and Google maps into one place, and get it into a format that you can use in your GPS.

How did you get it onto a GPS?

There are many ways to get your route into a GPS.

I usually try to get the route into GPX format.  The video above shows you one way to do that.

If I’m organizing a ride for a lot of people, I’ll usually provide a public link to the GPX file.  I also use Bike Route Toaster – a web site which accepts GPX files, and lets people send the route to their GPS straight from their browser.

What if I don’t have a GPS?

Perhaps you don’t have a GPS yet, and still want to go on an adventure?

These apps will let you load GPX files and use them as a route.

A word of warning though – navigating with a smart phone chews up the battery life.  If you’re planning on using your smart phone, perhaps you should carry a spare battery.  Also, smart phones are very susceptible to water damage.  If you’re in the middle of nowhere, and fall into a creek, you need to be sure you’ll still be able to use your phone to navigate home.

One tried and tested low tech way to navigate is with a paper map and compass.  I’ve often used Google Earth to print my tracks before a ride.  I keep them dry in a plastic bag, and always carry a small compass in case my GPS breaks.

It’s fun to explore new places on a mountain bike.  But it’s important to stay safe.  Regardless of whether you’re riding solo, or with friends, it’s always a good idea to:

Being an explorer, finding new places, sharing them with others  – they’re all pleasures that keep me riding my bike.

Where do you get ideas for your rides from?