Two weeks ago I wrote about my trip to Jackson Hole, but I did not get to get out riding right away because of work, but with all my work obligations out of the way it’s now time to ride!
So now I got my afternoon to rent a bike and hit the downhill runs in Jackson Hole, Wyoming. The bike shop attached to my resort in the village had mostly 2013 Scott Voltage bikes. So I whipped out the credit card and rushed to the chair lift. Since this was my first time hitting the downhill runs I did take a few minutes to pick the brains of the bike shop guys before starting my first ride. Their advice was pretty sound, start with the easy runs and get used to the bike. Then advance up after you are comfortable on it. I am glad I listened to them.

First up a little review of the Scott Voltage. I didn’t do much research on the bike before I jumped on it and figured I would adapt quickly. In my garage is a GT Force which I use on some of the rougher more rocky trails around here and Jay has a GT Ruckus that I have ridden. Both bikes are actually setup for downhill, but are very comfortable cruising on the trails. So how much different could the Voltage be. Well until I got on it I didn’t know what a freeride bike was and I have to say it was not the bike to choose for a first time downhill run. Three other people in our group rented them and all of us had the same experience with it. Great for jumps and steep declines, but don’t ask the bike to turn or stop. 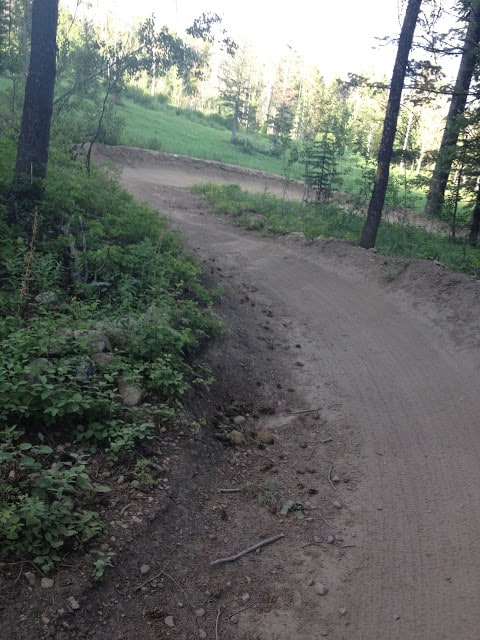 Little lesson in geometry of bikes. By “slackening” up the head tube angle the bike becomes more stable at high speeds, but gives up cornering at low speeds. Usually to compensate for this downhill bikes will have a bit longer wheelbase so in slower corners the bike feels more stable. The Scott Voltage is setup for tricks and jumps “Freeride” not really downhill or trail riding. So it has an extreme 64 degree rake on the front with a relatively short wheel base and top tube. The result of this geometry is actually a bit dangerous. At high speeds it doesn’t want to turn at all and at low speeds the back of the bike wants to step out. I am only 5’8” so when the bike shop first fitted me they gave me the short wheelbase voltage. It was so unstable after the first run I went back and got the longer wheelbase version. That helped a bit and I did get used to it, but one of my coworkers didn’t and it cost him. On his second run he went over a jump which lead into a corner. As he tried to slow down the back end kick out as he went into the jump and he got tossed from the bike onto his head. After a trip to the ER he was back at dinner fortunately with only a mild concussion.

Once I got the longer wheelbase bike and got used to the back end coming around every time I went into a corner I started to enjoy the hills.

The beginner runs were actually very fun as they had great flow with nice banked corners. If you just like carving a trail at high speeds this was a blast. I actually wish I could have ridden it on a hard tail because it was so smooth and flowed so well I think I could have gone a bit faster. The advanced runs had some jumps mixed in with some high bank corners. Again the flow from corner to corner was great and I was able to settle in quickly.

Only having an afternoon to ride I only got 6 runs down these trails. Oh to have more time. The last trail was the expert run. I got to walk it after dinner one night and it was definitely not for the faint of heart. Given another afternoon I would have given it a try, but I just ran out of time. Not to mention I didn’t have the confidence in the bike I was on to really attack a run with that many jumps, blind corners and steep banks.

Overall that was one of the most fun times I have had on a bike. I am hooked on the downhill experience now and I am already plotting where to go next. Fortunately there are some ski hills in my area that are bike friendly in the summer. This time though I will have my own bike and a bit more confidence in it.