Down The Rabbit Hole

Down The Rabbit Hole

Winter on Colorado’s Front Range is traditionally mild. The vast rolling fields of the Republic incline ever so slightly for 850 miles westward from the Mississippi River that one wouldn’t notice they are already a mile high when the Rockies burst from the depths and attack the sky. Here, between mountains and plains, we live in a semi-arid blue-sky paradise where 300 days of sun and chinook winds quickly sublimate the light snows that occasionally occur down here, leaving our trails tacky and heroic the vast majority of the winter. But even here there are stretches of weeks on end where none of our nearby trails are ride-able and I sink into a very dark mood. 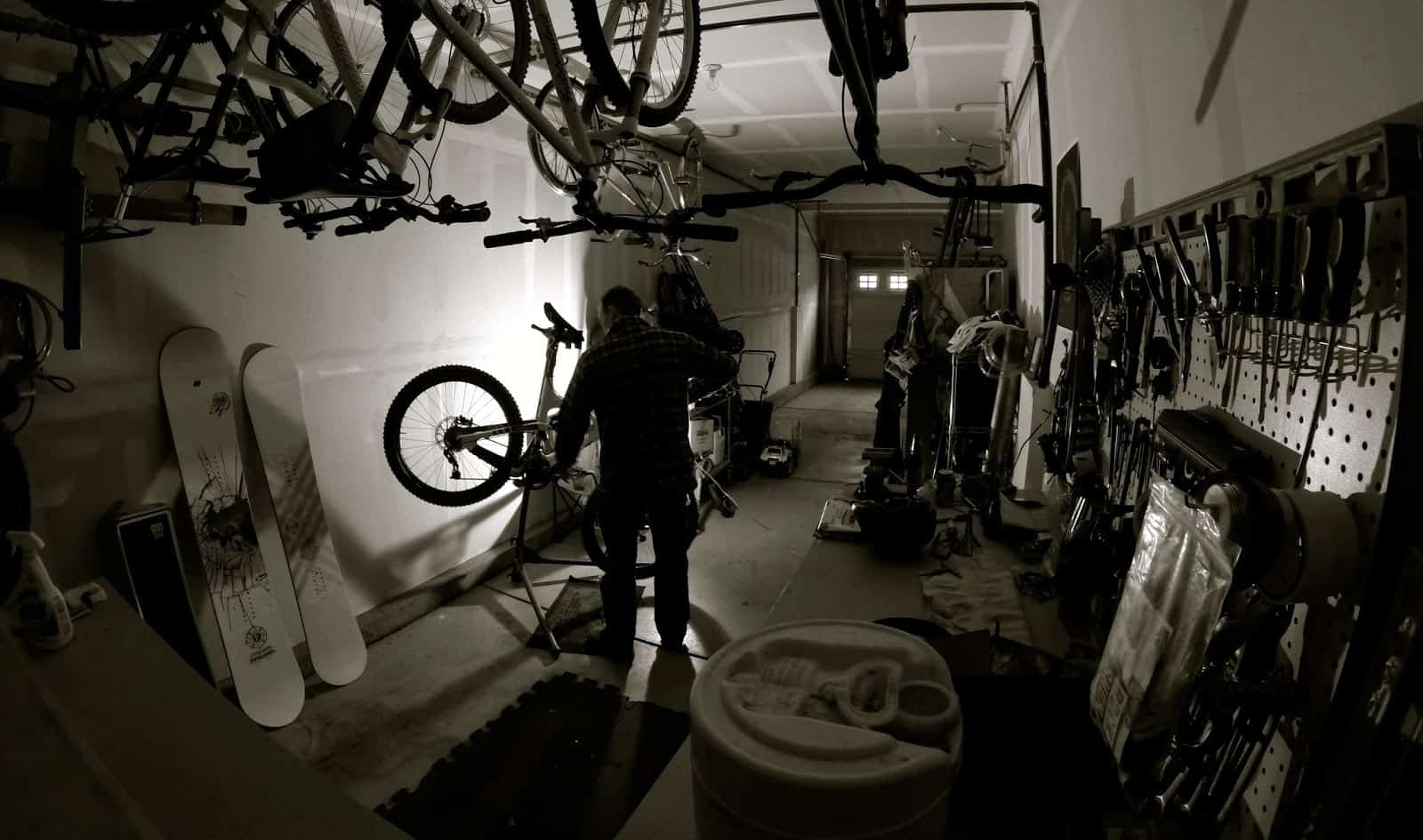 I can look West from my house and see snow-locked trails forty horizontal and one vertical mile away in macro-resolution. A meter or more of snow and several months separate me from them. The bald faces of the Indian Peaks solemnly watch the sun linger longer each day. Ancient whispers are carried on chinooks, tumbling down from far above treeline carrying the glacial smells of ozone and granite. These are the harbingers of spring.

This interminable time between summers is made tolerable only by anticipation. I’m certain that Anticipation was borne many dark millenia ago to keep humans plodding along through the long dark winters of ice ages. Anticipation is a poor substitute, a hooker when one needs a lover. Methadone for heroin. But in times when it MUST be enough, it is. 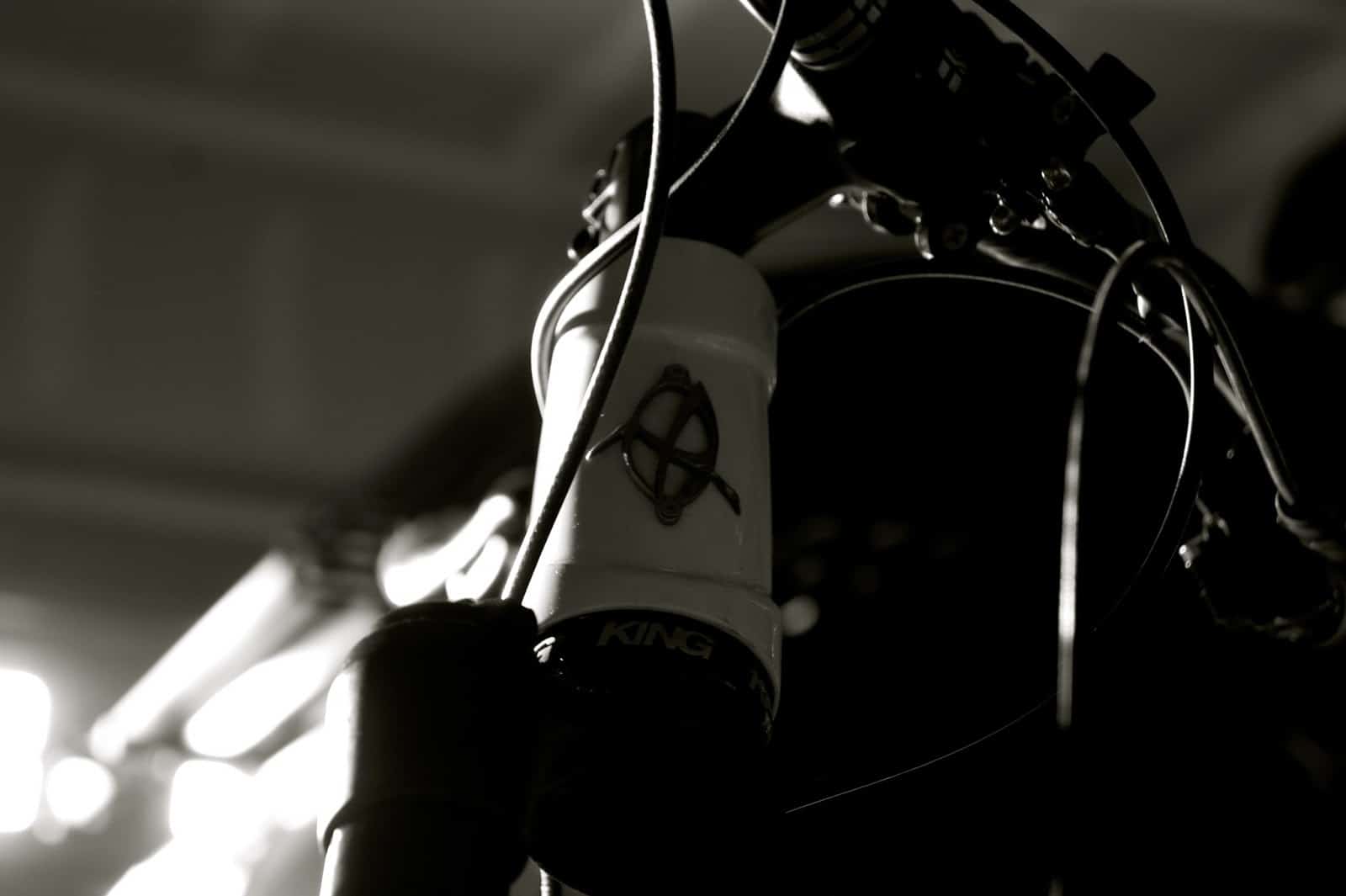 I drag out old maps and notes and load kml files into Google Earth and begin actively anticipating. I load and reload my back-country pack. I change the batteries in my SPOT tracker – whether or not they need changing. I dedicate industrial-grade bandwidth to searching the internet for reviews or this product or that widget. I scout for esoteric reports from trails I’ve yet to travel. Things start to arrive from my LBS and from my dear friend, Brown Santa. I spend a lot of money. I exchange more text messages than a high-school cheerleading team discussing plans with my riding buddies: rides, trips, all hypothetical. Nothing is solidified. There are no absolutes. All options are available. There is a developing panic that there won’t be enough time, that eventually we will have to triage these rides. Some of these maps may go unused. I stare at them as a parent might his children when confronted with the realization that he would have to choose which of them would starve. 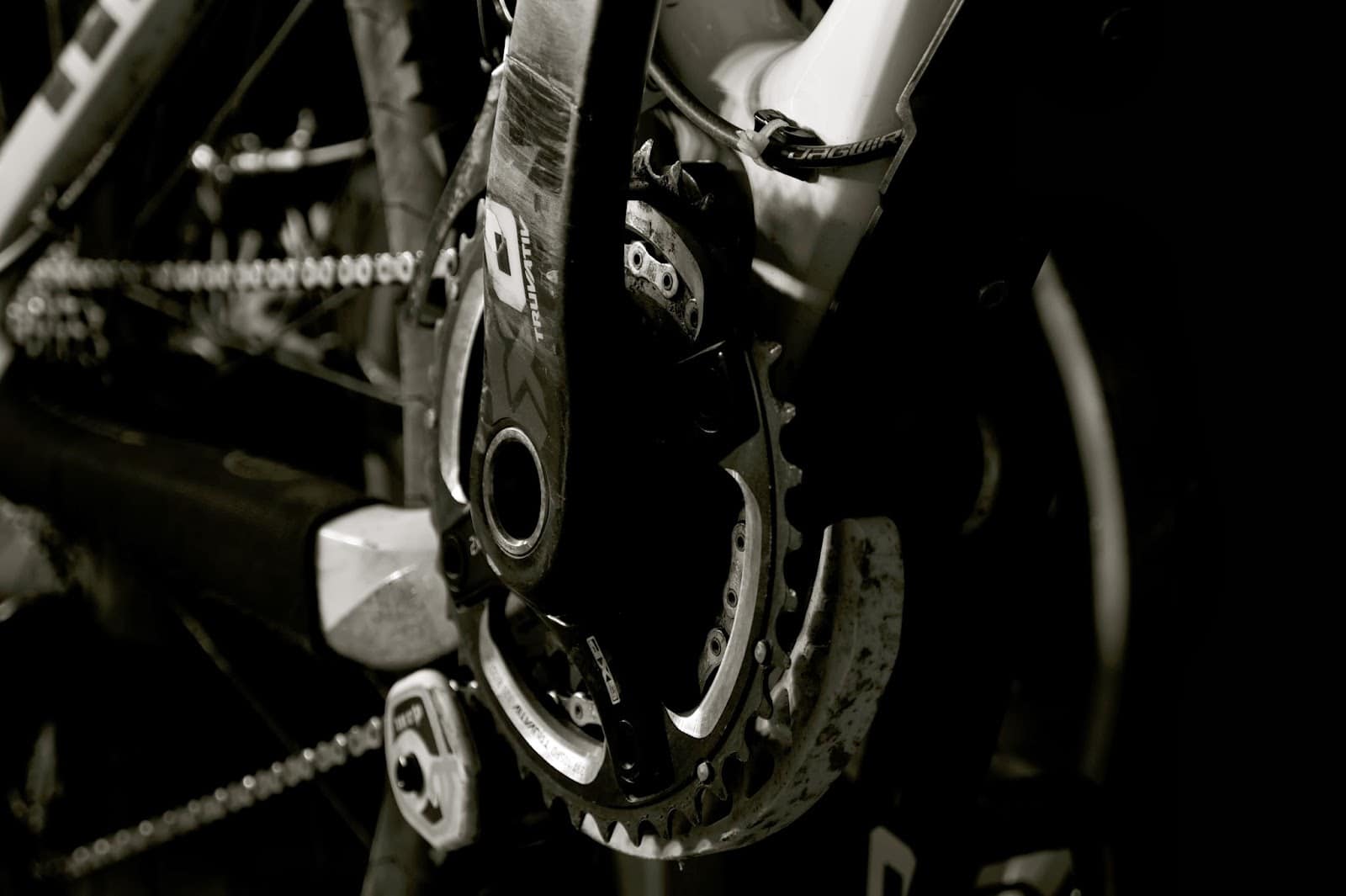 I cannot make such grim decisions in February. I shake my head. I make a pot of coffee, put on my hideous wool flannel that is ugly and comfortable and warm. My wife is continuously plotting the demise of this shirt. I was wearing it years ago when she called me to come pick her up from the scene of a rather minor automobile accident. I had just woken up and between my hair and stubble and this flannel I was received not as a savior but as a hobo. That’s the kind of apparel this flannel is. I head to the garage and stare at my bikes with the context of the maps and Google Earth and plans fresh in my mind and assess their readiness.

A laundry-list of projects and necessities begins to develop. I can’t remember the last time I rebuilt the fork. The rear suspension pivots all need to be gone through. The bottom bracket needs to be cleaned and re-greased. The clockwork beehive of my Chris King hub needs to be serviced. I spin the pedals and click the shifters absentmindedly and there is a little hesitation from a disobedient chain somewhere in the middle of the cassette. I set the coffee down. As frequently as this very scenario happens, I am oblivious to the rabbit-hole I am entering.“I’ll just tune this little skip out” I tell myself. “Should be a five minute job”.Much of this bike was new last year. New 10-spd drivetrain, crankset, pedals, tires.

I inspect it with a sense of deja vu as all the anonymous scratches and dings slowly reveal their origins; each one a small clue telling something about a ride. The bicycle’s memory is in this wear. The constant addition of time and use. I think of the fine aluminum shavings that used to be attached to my pedals and chainrings that are left out in the wide world like metallic breadcrumbs marking my passing. The molecular tracing of Black Chili compound rubber out on the real earth to match the red virtual gps track I’d imported into Google Earth.

“These brakes probably need to be bled” An hour goes by.

I jump on my battered old workhorse cyclocross bike, am gone for 15 minutes and return with a sixer of Deschutes Brewery Black Butte Porter.

The gouge in my bashguard reminisces with me about that big group ride we did last spring. The scratch in the right upper leg of my fork takes me back to Jones Pass where, having survived a climb to 13,000ft+ and a descent back to 8,000ft, my bike fell over in the parking lot and put a ding in an $1,100 fork. 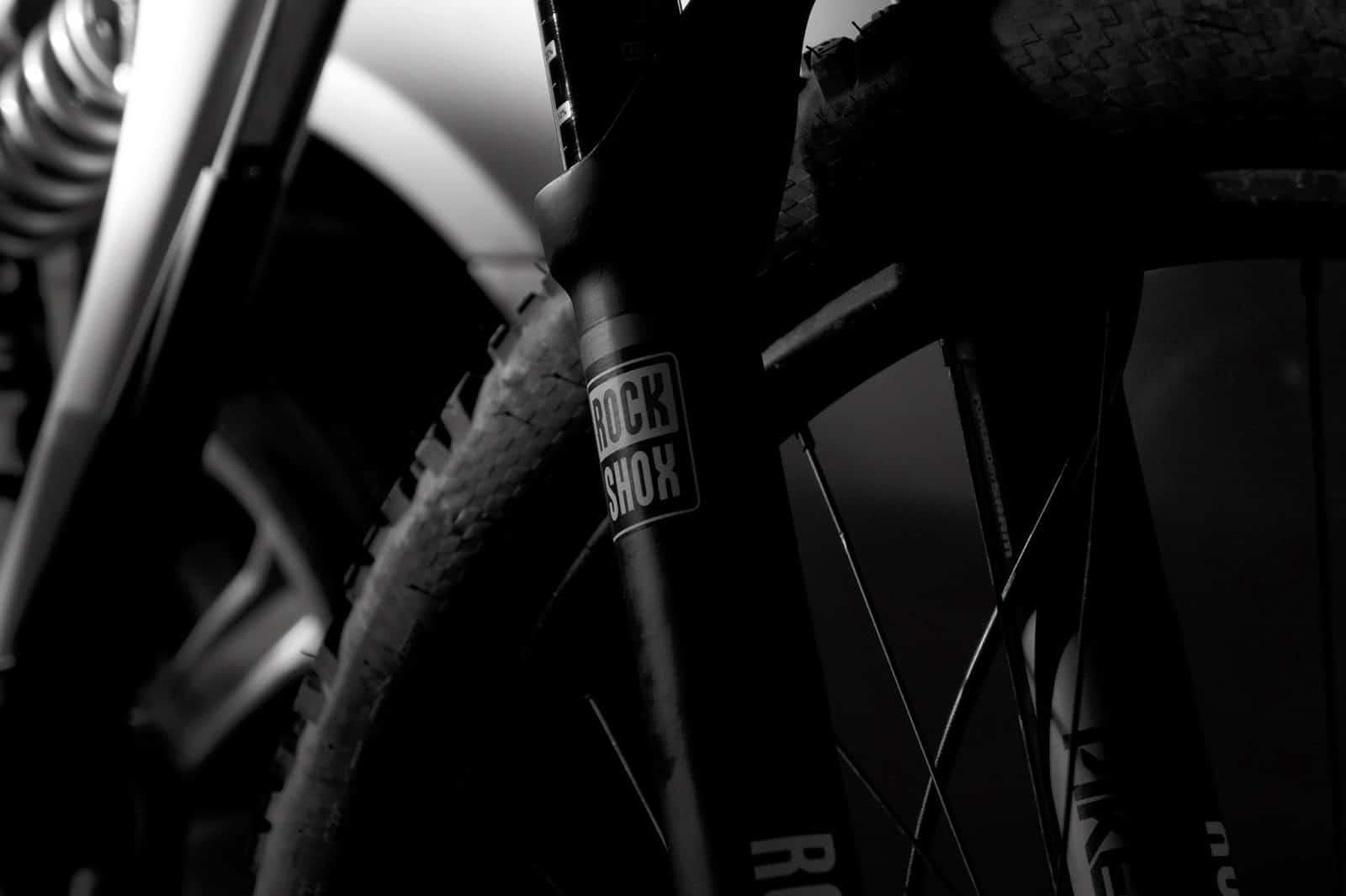 Which is partly why there is a brand new Pike sitting in a box on my workbench. An indeterminate amount of time passes, unchecked.

My wife opens and closes the door to the house several times and reminds me of other more pragmatic responsibilities which demand my attention. But my hands are dirty with grease and dirt and I’m holding the new fork into the head tube with one hand and stretching to reach my Park 3-way wrench with the other. I’ll just finish torqueing the stem bolts and then I’ll worry about the rest later.

But then I just have to bounce it a little. I just want to feel it out, compress it, twist some knobs, check the sag and set a baseline air pressure. Really can’t do that without putting the brake caliper back on. I’m a little panicked now because somehow it got dark outside. I hurry with the caliper hardware and a “good-measure” 1/8th turn is too much and I crush the little alignment washer on the caliper bolt stack with a “snap.”

Thirty minutes later, in the apparent aftermath of a bicycle hardware explosion, every bin of my stash of odds-n-ends ransacked, I find a suitable spare and the caliper is secured. I adjust the brakes and contemplate the subtle waves and discolorations of my rotors, earned during marathon descents in Moab and Oakridge and Durango.

The blinding orange-brown blur of Fruita’s high desert. The emerald green and magic-carpet dirt of the Pacific Northwest. I look out my garage window and see only the shadowy outline of the mountains to the west. In the faded starlight I can only see that they are there, the snows are not visible.

I am encouraged by this and as I burn the midnight oil and my remaining domestic capital, I gain momentum. My wife gives up. She had a bowl of cereal for dinner and has surrendered. Her white flag is the cold beer she has brought me. I kiss her and my son goodnight and when I assure her I’ll be up in a couple minutes she knows not to expect me anytime soon.

The rear hub is next. I pull down my Chris King Hub Service Tool from its high pedestal on my tool pegboard. It is a decadent piece of equipment. Heavy and polished and anodized. It feels very industrial and very beautiful. When it is held for long enough its mass absorbs sufficient body heat that it remains warm long after it is put down and when picked up again it’s welcoming and inviting to hold. I find that based on nothing more than the way this tool feels in my hand I tend to service my hubs more frequently than they probably need. With minimal effort the rear hub explodes into an array of jewel-like rings and helicals. Each piece is cleaned and inspected. Fresh grease is applied. I reassemble the ring drive and its associated bearings. Each step is galvanizing. The parts fit so perfectly that when they go together the seams between them vanish and they become more than their sum. The completed ring drive is seated in its bore with a final “click” and it is whole again.

I spin the cassette body and the angry bees inside come back to life. It is a joyous and magical sound. I tweak and spin, spin and tweak. Little by little I reverse the entropic effects of a long riding season. The wheels spin true, pulleys turn free, and pivots move smoothly. The brakes actually feel like they could stop me instead of just providing a strong recommendation. The adjustable seatpost adjusts. Five beer bottles are empty and my head is full of anticipation. 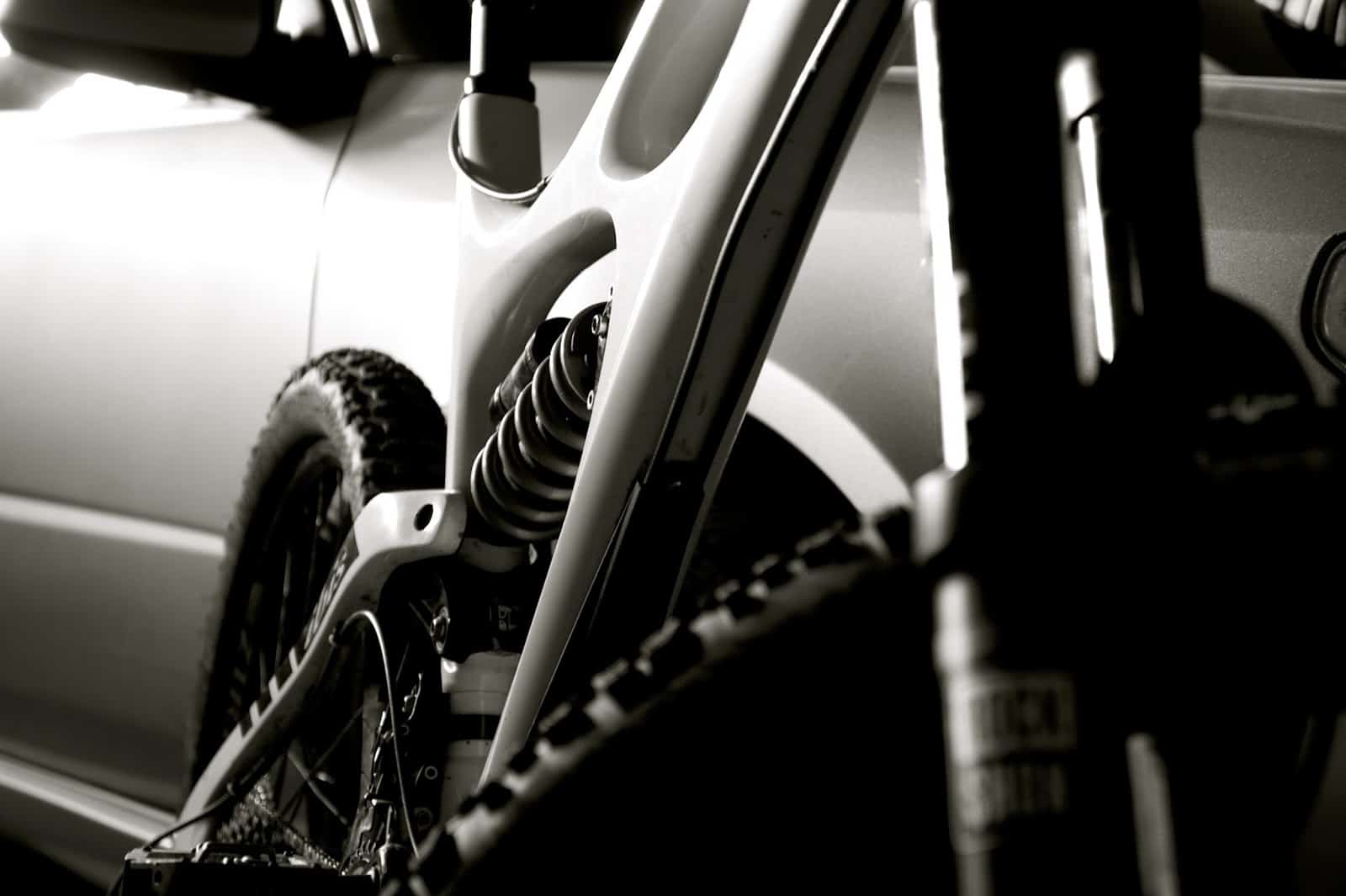 Here in my garage – in its completely serviced, unmolested state – my bike rests at the top of all the downhills before me. It is staged at the base of all the climbs. Everything works. It makes all the sounds it should and none of those it shouldn’t. I clean my workbench and take a few long sweet pulls from my last Black Butte Porter. I lean up against the bench and silently stare at the bike in the stand.

I spin the cranks and absentmindedly click through the shifter.

There are no skips.