There are nights even now, over three years since I first visited Oakridge, OR that I wake up with my heart pounding and green flashes of immense trees smeared on my subconscious. In my myriad mountain bike travels there is no other place that has left such a lasting impression on my cycling psyche than OROR.

Oakridge sits in a miraculous climate zone above the rains of Oregon’s coastal region and below the snows of Willamette pass. About and hour due East of Eugene and and hour and a half West of Bend it’s far enough from anywhere to be it’s own little Land of The Lost. A mountain biking enclave that the cycling world often forgets about. The town rests in a similar economic zone, still recovering from the logging bust and sleepily climbing upward waiting for the mountain biking boom. It is perched at the precipice of mountain biking mecca-dom, and has been for the last ten years. It begs to be iconic. Strangely, it isn’t yet. If you haven’t heard of OROR you will. Or, at least you should. I can almost wish that no one would ride there, that I could keep Oakridge small and the trails pristine and the chilled-out vibe that pervades this sleepy little town, and I could visit it again and again and come back to the Before-It-Was-Huge. Any day now, any minute, there will be a zombie-tide of mountain bikers who descend upon OROR bringing money and shuttles and big bikes and trail conflicts and traffic and starbucks and the quiet charmer of OROR will be rolled under the economic boom of travel tourism and join the ranks of Sedona, Fruita, Moab, and others before it. Transformed irrevocably, for better or worse. Any. Day. Now. Get there while you can. 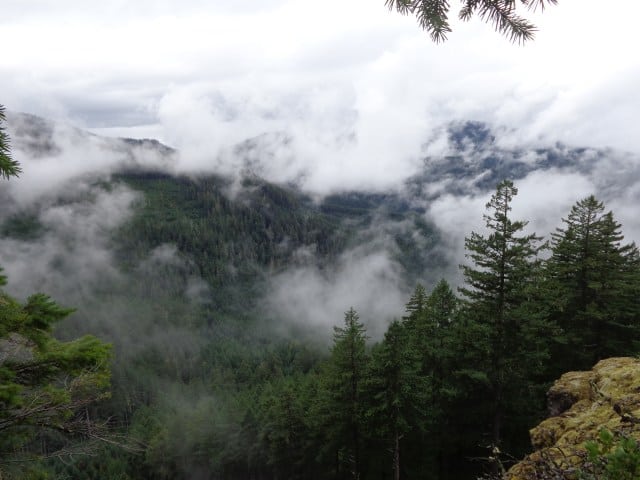 This trip was our Return. I have a tight-knit group of riding buddies who collectively ride just this one time a year. This band of brothers and our annual trip has lasted over fifteen years. Several years ago based on the generosity of one of the founding members and his connections as an employee of a major airline we began branching out of our normal “local” trips to Moab and Salida, CO, flying standby on buddy passes. Standby means that there is no guarantee that you will even get on the flight of your choice, or that the entire party will get on a given flight. Our man would scout the flight bookings leading up to the trip, and we’d come up with several contingency destinations, playing roulette with mountain biking awesomeness not knowing exactly at which legendary destination we’d land. We’d spent the last two bike trips in Sun Valley, ID and Downieville, CA and while they were amazing in their own right; from stumbling around downtown Sun Valley with a half-barrel of microbrew to dodging gunfire in Downieville still neither trip could live up to the promise of Oakridge. We had to come back. The only danger in my mind was in the fact that Having is often not such a pleasing a thing as Wanting, and I worried that the hype of the previous trip would overshadow the current one. I thought that the second dose of OROR would cure my fantastic night terrors but the opposite was true. Having been there twice, and some other great places in between, I only want to go back again. It’s just that good.

The logistics of such a trip are far from simple. This year the flights into Portland from our native Denver and Phoenix were predictably underbooked and we made it there without fail. The Phoenix contingent arrived first and rented some sort of minimalist compact SUV that would serve two specific functions: Secure our post-ride beers from interlopers and ambient temperatures, and retrieval of the pickup. The Denver contingent arrived second and secured a full-size rental pickup truck to serve as shuttle wagon. The Truck would also be the hauler of the majority of the bikes and would make the stop in Eugene for a half-barrel of beer. We learned some years ago that on a trip of these proportions that of all the shared expenses this group would incur, rental vehicles, lodging, food, shuttle fees, that our beer tab was the most severe. It is best to buy in bulk.There are few lodging options in Oakridge. It was unanimously decided that the Best Western would be a bad idea, and for less than what we’d have paid at the motel we were able to rent a three bedroom house with enough couch and floor space to accommodate everyone.

If you can’t bring your bike, break your bike, or otherwise need a bike, the folks at the  Willamette Mountain Mercantile can set you up with sweet, high-end rentals like Ibis HD’s and Ripley’s (I’m biased, so shoot me).
If you really want to suck the marrow out of Oakridge, go all out and hire your shuttle daily via Oregon Adventures. It’s not cheap, but it’s definitely worth it.

The following is the menu of trails that we followed this last go ’round and with the exception of Larison Rock are represented in the video. There are a ridiculous amount of trails in this little area. You will get lost and never want to leave. You will want to quit your job and move to Oakridge and live the Mountainbikelife there until you realize that there isn’t any housing and there aren’t any jobs. But other than that, it’s paradise.

Alpine is the crown jewel of this tiny two-wheeled gem. It is shuttle-able or rideable from town, and contains within its twist and turns options that can range from a rapid-fire shuttle-fest to an all-day adventure. This is the gateway drug, the siren call, the long-lost love that will haunt you forever once ridden. It is mile after mile of earthen perfection.

Like most of the trails in the area it is made of a base of loamy decomposing duff. In Colorado the trail is mostly jagged rocks and aggressive flora that wait for sudden gusts of gravity to pummel you when you crash. On Alpine, the trail surface is the sweet bosom of mother earth gently caressing her children. The upper section is called The Jedi Forest and as the name implies it imparts the distinct sensation of swooping through the forests of the moon of Endor while evading Imperials. I heard that the locals do all their trailbuilding via Lightsaber. 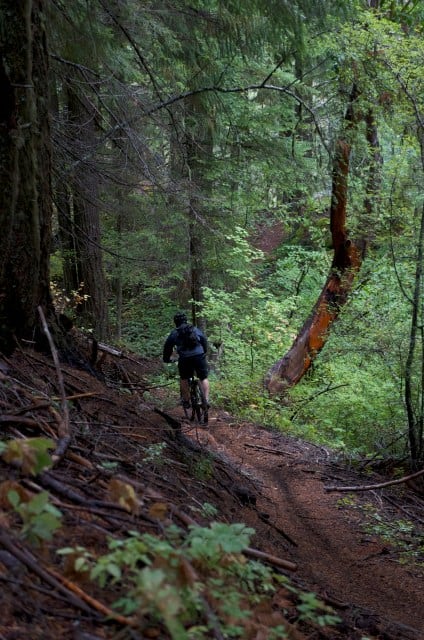 I wasn’t able to include Larison Rock in the video because the camera lens fogged over and the video was unacceptable. However, that is not to say that it is without merit. Larison is rideable from town via an asphalt road to the top or by shuttle vehicle. It’s crazy fast, wicked good, and only takes about 15 minutes to burn down. It’s a great ride all by itself but particularly shines as an afternoon cherry-on-top following a ripping morning on Alpine. Oregon Adventures Charge $10 for this little trail apértif. That’s just two beers at the pub. It’s a burger and fries. One hand of Blackjack at the lowest tables. In short, it’s a bargain.

Still my favorite ride combo of the trip when combined with Hardesty in a double-shuttle. This can be done as a really big ride by riding a million miles up an interminable logging road, via single shuttle all the way on down, or by a deftly placed double shuttle. It’s big. It’s crazy-fast and tight and techy. It’s got whoops and g-outs and sweeping vistas of the Willamette Valley. The day we rode here we were intermittently socked in by clouds. The trail snakes and bends and at one point the trail dropped below me and I fell blindly into a passing cumulus, punching a swirling hole through it for the trailing rider to follow.

We rode the river trails from town and picked up a fireroad to the top of Heckletooth mountain which is no longer accessible to vehicles due to a massive mudslide rendering it impassable. This ride was the toll that had to be paid to our guide, a conquest to prove that we were not the run-of-the-mill shuttle monkeys that lurk about without the aerobic capacity to climb a flight of stairs let alone a mountain. The locals are friendly, but firmly believe a rider should earn their turns. Show them that you can and they might show you something amazing. Like Heckletooth. Where Alpine is about screaming the forest past your ears at warp 9, Heckletooth is painted with switchbacks and bermy curves. It is the yin to Alpine’s yang, and is wonderful and meaningful in all the ways that Alpine isn’t. And vice versa.

Several years ago the swollen river destroyed a footbridge that made the River trail a viable connector. Undaunted, local trailbuilders like Derrick Bell came to the rescue inventing several miles of singletrack to replace it and spawning such creations as “Derricks Deadly Switchbacks”. 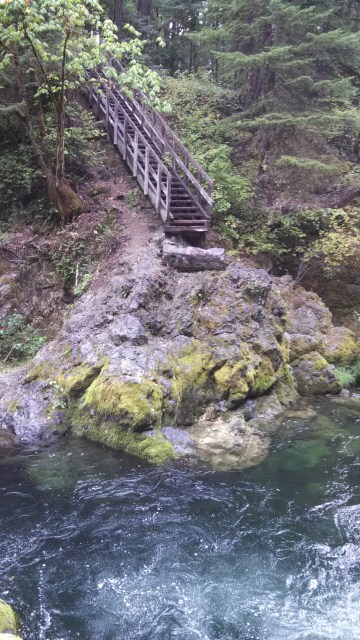 There were some corners on this ride, deceptive convex rollers where I am certain that my knobbies barely touched the dirt, that they merely clutched at the earth as I flew over it. Moon Point is a multiple personality ride and the terrain changes numerous times before you can blink. I found myself marveling at the landscape around me as I shot out from a pine-needle blanketed floor onto a rocky outcropping. The bottom of the trail is easily linked to the lower chunk of the North Fork of the Willamette trail for some leveled-out cruising back into town. 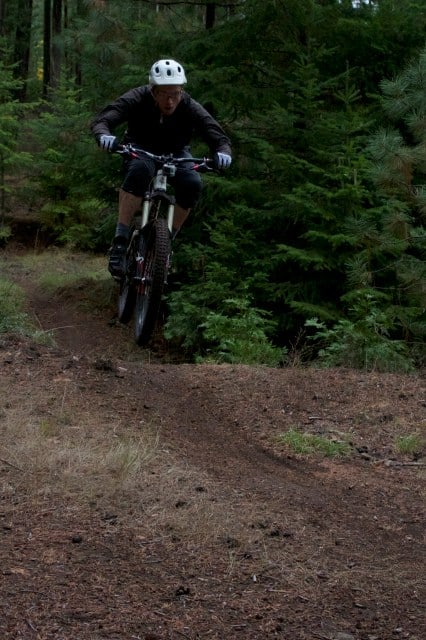 Not a trail but just as much a mountain biker destination nonetheless. The Brewers Union Local 180 is a true Ale Public House and Brewery. It’s not so much a bar as it is a community hub. It has an amazing selection of cask-conditioned ales pulled from it’s depths via beer engine along with an impressive number of exchange beers. The food is almost as great as the beer and the warm, relaxed atmosphere is the perfect way to chill after a day on a bike.